Trafficking of folates and antifolates into human cells

Humans possess at least three distinct transport pathways for the uptake of folates and antifolates into the cell. Antifolates have been used in the treatment of patients with cancer and autoinflammatory disease since the late 1940s. While cytotoxicity at higher doses leads to limited utility in the clinic, classical and newer generation antifolates – most often methotrexate and pemetrexed, respectively – are still widely used to treat cancers derived from epithelial cell lineages (e.g. leukemia, choriocarcinoma, ovarian and breast cancers) and autoinflammatory diseases (e.g. rheumatoid arthritis, psoriasis, Crohn’s disease). The efficacy of antifolates is comprised by dose-limiting toxicity based on transport into normal cells.

Human folate receptors (hFRs) are high affinity, glycosylphosphatidylinositol-anchored receptors responsible for the uptake of both natural folate metabolites and therapeutic antifolate drugs. As much of the toxicity inherent to current antifolates could be ameliorated via design of therapeutics specifically taken into cells via the hFRs, we are exploring the binding and release characteristics of folates and antifolates to hFRs using a combination of structural, biophysical and biochemical techniques. The goal of our efforts is the eventual development of a new class of antifolates specifically targeted to hFRs, receptors present at high levels in disease-causing cells (e.g., cancer cells). Our structural and biochemical data will be the basis for the development of the next generation of antifolate therapeutics with the desired limited cytotoxicity profile in normal tissues. 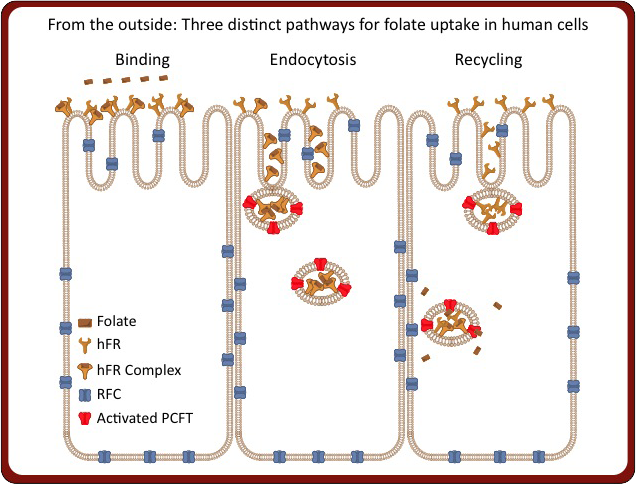 In addition to our work on hFRs, we are also studying two transmembrane transporters responsible for trafficking folates and antifolates. The most prevalent mode of cellular uptake of folates and clinically utilized antifolates is via the reduced folate carrier (RFC). As RFC is present in normal cells, dose-limiting toxicity in normal tissue is seen for all therapeutic antifolates. Additionally, a second membrane protein, the proton coupled folate transporter (PCFT), can transport folates and antifolate drugs at the acidic pH seen in portion of the lower intestine (i.e., duodenum, jejunum) and in endosomal vesicles in the cell. Given our new capacity for high throughput crystallography afforded by the new Crystallization Automation Facility, we are able to investigate the structure and function of these highly challenging membrane proteins.

The development of new antifolates has been ongoing for more than six decades, including recently developed molecules that are preferentially transported into cells via folate receptors (FRs) rather than the reduced folate carrier. As FRs are not generally expressed on healthy tissues, but overexpressed on cancer and auto-inflammatory cells, we expect these drugs will be preferentially transported into these disease-causing cells. Cellular uptake via FRs should reduce the side effects of chemotherapy based on the minimized transport into healthy cells. 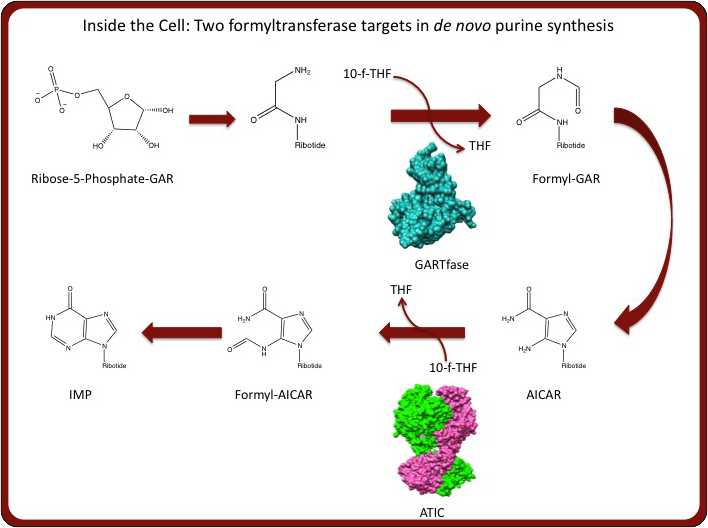 Additionally, new enzyme targets for antifolates have emerged beyond the traditional targets – dihydrofolate reductase (DHFR) and thymidylate synthase (TS). Specifically, we are interested in antifolates that target either aminoimidazole-4-carboxamide ribonucleotide transformylase/IMP cyclohydralase (ATIC) or glycinamide ribonucleotide transformylase (GARTfase), enyzymes that transfer a formyl group from 10-formyl-tetrahydrofolate to aminoimidazole-4-carboxamide (AICAR) or glycinamide ribonucleotide (GAR), respectively (see above). We are currently performing enzymatic and structural analysis of the aforementioned FR-targeted antifolates with the ATIC and GARTfase enzymes to yield data for design and optimization of new antifolates. Stated simply, we are interested in the development of new drugs that are transported via FRs and inhibit ATIC or GARTfase and are performing directed biochemical and biophysical studies to achieve this goal.

The College of Arts & Sciences

The College of Arts & Sciences